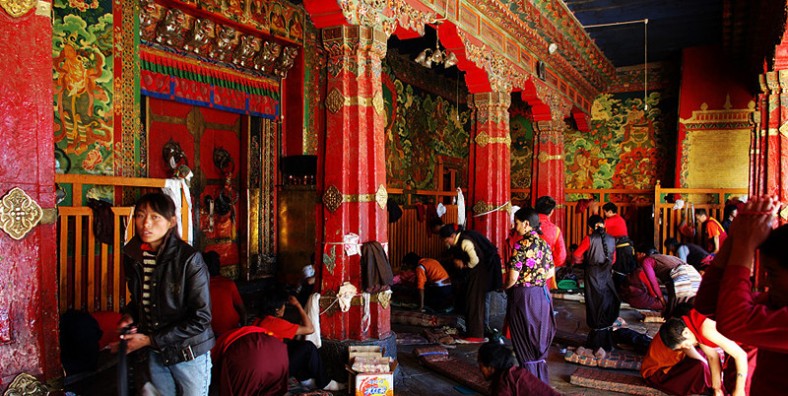 Jokhang Temple (or Jokhang Monastery) is the spiritual center of Tibet and the holiest destination for all Tibetan pilgrims. It is is listed in the World Cultural Heritages with Potala Palace and Norbulingka. Situated at the heart of the old town of Lhasa and surrounded by Barkhor Street, this four storied building, built in the 7th century by Songtsan Gambo, with roofs covered with gilded bronze tiles, demonstrates a combination of the architectural style of Han, Tibetan, India and Nepal, as well as a Mandala world outlook of Buddhism. It was originally called the ‘Tsuklakang’ (Tsulag Khang) – ‘House of Religious Science’ or ‘House of Wisdom’ during the Bon period of Tibet, which is referred to geomancy, astrology, and divination of Bon. Today it is more commonly known as the Jokhang, which means the ‘House of the Buddha’. Visiting Jokhang Temple for a real discovery tour in the mysterious and sacred land, you can get close to the religious part of Tibet and experience the devotion of Tibetans.

In the Tibetans eyes, Lhasa city was named after the Jokhang Temple after it was constructed. Survived from the Anti-Buddhist activities, it went thought several reconstructions and become a massive building of first earth & wood structure, covering an area of 2.51 hectares. The Jokhang Temple was constructed by Tibetan King Songtsan Gambo in the 7th century to house the sacred image of the Buddha-Jowo Rinpoche, which was the dowry of Chinese princess Wencheng, the second wife of Songtsan Gambo married 641.

Jokhang Temple had went through twice destructions in the Anti-Buddhist activities happened in the late 7th century and the middle period of 9th century. During those times, Jokhang Temple was closed and the Jowo Rinpoche was buried to earth for two times to avoid the damage.

As the first civil structure construction, Jokhang Temple went through the several reconstructions in Yuan, Ming, Qing dynasties, and becomes a massive building consisting of three floors and an open roof all filled with chapels and chambers. For over 1300 years of history, the Jokhang Temple has some well-preserved architecture of Songtsan Gambo period and the Jowo Tinpoche statue is still enshrined within the temple as the holiest object in Tibet.

• Life-sized Statue of Shakyamuni
The Jowo Rinpoche (or Jowo Shayamuni), a life-sized (5 foot/1.5m) statue of the Shakyamuni of age 12, is the treasure of Jokhang Temple as well as the great collection of Tibet. It is said that the Jowo Rinpoche was made in India and later was given to China as a gift. When Tubo King Songtsan Gambo married Chinese Princess Wenchen during Tang Dynasty, Jowo Rinpoche, along with extraordinary Tibet religious art treasures was brought to Lhasa as dowry in 641. There are many pilgrims coming Jokhang Temple from different places in the world to pay homage to the Jowo Rinpoche. They believe that one devoted prayer will bring their blessedness.

The interior of Jokhang Temple is an atmospheric labyrinth of chapels dedicated to various gods and bodhisattvas, illuminated by votive candles and thick with the smoke of incense. There are full of thousands of hundreds of Buddhist statues and images which were brought by the two princesses (Wencheng & Bhrikuti) as part of their dowries. While walking through those atmospheric labyrinthes of chapels for various gods and bodhisattva, you may feel like getting back to the ancient mysterious land and find all around you is religion. On the right side of the front gate of Jokhang Temple are two murals, with one depicting the procession of princess Wencheng arriving in Tibet and the other describing how the Jokhang Temple was built. Some other fine murals and Thangkas hanging on the walls are also worthy of your visiting.

Jokhang Temple enjoys a long history of over 1,000 years and holds a high status in Tibetan Buddhism. It is the existing most resplendent monastery built in Tubo Dynasty and the earliest civil structure in Tibet. Combining the feature of Chinese, Tibetan and Nepalese architecture, Jokhang Temple becomes a model of Tibetan Buddhist building. As you get close to Jokhang Temple, you eyes will firstly be caught by the beautiful golden roof. There are still something preserved in spite of several destructions. Under the roof, you can find the original wooden beams and rafters. In the lobby, there are Newari door frames, columns and finials from the 7th and 8th centuries.

• Have a Splendid View from the Platform and Golden Roof
Following the steps to the higher floors, you will find there is a platform in the second floor. There are several Buddhist souvenirs for sale. From this platform, you can the amazing architecture style which is another essence of Jokhang Temple. Climb to the rooftop, you will get a better sightseeing. Apart from the elegant roof itself, the rooftop offers great vantage points for looking out over square to watch the devotees. Don’t miss the nice overview of Potala Palace from the roof.

• Suck up the Religious Belief
As the spiritual center of Tibet, Jokhang Temple always attract endless of pilgrims. Jokhang Temple is more important for Tibetans. People walk clockwise around it constantly and prostrating themselves in front and get crowded. The praying outside the temple is worth seeing to suck up the local religious belief. If you want to view the pilgrims do their devotions, you can tour around the exterior of Jokhang Temple in the morning. There are two gates of the temple, one is for locals with a big queue lining up; the other is for tourists to get in.

• Watch the Buddhist Activities during New Year Festival
During Tibetan New Year, which always takes place between late January and early March, the Great Prayer Festival will be hosted by Jokhang Temple. The huge columns in the Jokhang Temple Square will be decorated by colorful prayer flags and thousands of butter lamps will lighten Jokhang Temple. Most important activities include sutras-chanting and scripture-debating. The Tibetan believes that the large-scale Buddhist activities will bring them the peace, blessedness and fortune.
Note: Tibet might to be closed for foreign traveler during the Tibetan New Year Festival.

Jokhang Temple is situated at the heart of the old town of Lhasa and surrounded by Barkhor Street. The advanced traffic system provides visitors convenient ways to travel. Visitors can take buses or choose self-driving.

Attraction Tips:
1. Traveling Hours: 2 or 3 hours
2. Traveling Seasons: March to October
3. As the holy religious temple, morning is reserved for pilgrims and tourists can only tour Jokhang Temple in the afternoon from 11:30 to 17:30. After entering the temple, you must walk clockwise from left to right.
4. The ticket is for 85 rmb per person. You highly recommended to learn more history and culture about Jokhang Temple before visiting it.
5. Taking photos is not allowed inside the temple, unless there is a permission mark (normally need to pay). However, you are permited to take photos in the square and golden roof.
Gaxue Cliff Painting in Baxoi County, Chamdo
Xiachayu Town in Zayu County, Nyingchi
Chakpori Hill, Lhasa
Naisa Pagodas in Lhatse County, Shigatse