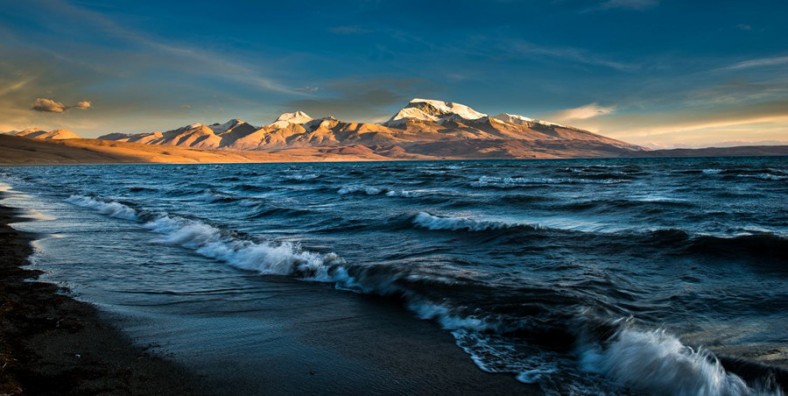 Lake Rakshastal is a lake in Tibet, China, lying just west of Lake Manasarovar and south of Mount Kailash. The Sutlej River originates at Rakshastal’s northwestern tip. Despite its close proximity to Lake Manasarovar (about 3.7 kilometres or 2.3 miles), Lake Rakshastal does not share the historic religious significance of its eastern neighbor.
The name of the lake literally means “lake of the demon” in Sanskrit. It is also known as Ravana Tal, as it is considered to be the place of severe penance by Ravana, the demon-like egoistic King of Lanka in Hindu theology .

However, despite its notoriety, Rakshastal bears no less beauty than other lakes in Tibet. Rakshastal covers a total area of 250 square kilometres (97 sq mi), at an altitude of 4,575 metres (15,010 ft). Though absent of nearby grasslands, the white cobbles, the hills and the island colored with dark red, and the deep blue lake water present another distinctive picture absent from many of the places more frequented by visitors.

In Buddhism, Lake Manasarovar, which is round like the sun, and Rakshastal, shaped as a crescent, are respectively regarded as “brightness” and “darkness”. Its salty water, in stark contrast to the fresh water of Lake Manasarovar, results in there being no aquatic plants or fish, and is considered poisonous by locals. It is a belief that the short river named Ganga Chhu, which connects Lake Manasarovar with Rakshastal, is created by rishing to add pure water from Manasarovar.

There are four islands in Rakshastal, named Topserma (Dose), Dola (the two biggest), Lachato (Nadzhado), and Dosharba. The islands are used by local people as winter pastures for their yaks.

Mythology
According to Hindu scriptures, Rakshastal was created by Ravana for the express purpose of garnering superpowers through acts of devotion and meditation to the god, Shiva, who resided on Mount Kailash. It was upon the banks of a special island in this lake that he would make a daily offering with one of his ten heads as a sacrifice to please Shiva. Finally, on the tenth day, Shiva was moved enough by his devotion to grant Ravana his wish to obtain superpowers. This lake is set as a contrast to the holy god-created Lake Manasarovar.