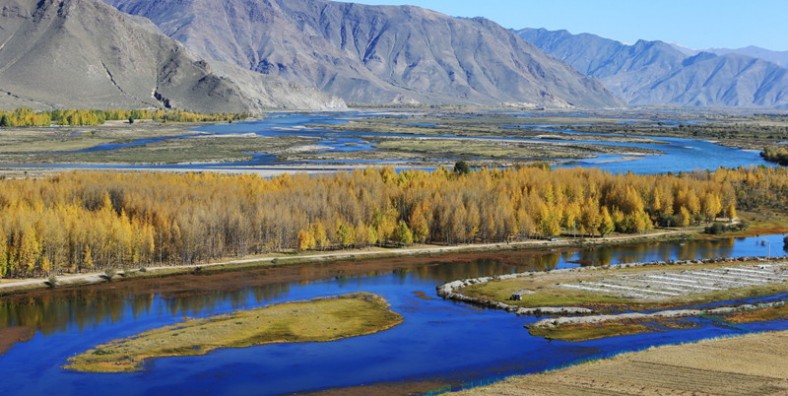 Located in the south of the high-altitude Tibetan plateau, the Lhasa Valley is one of the most stunning valleys in Tibet. The Lhasa River, also known as the River Kyichu, flows through the center of the valley to the sough of the city of Lhasa, the Tibetan capital. One of the major tributaries of the Yarlung Zangbo River, which is the upper section of the Brahmaputra, the river runs in a zig-zag course, passing through the valley to enter the Yarlung Zangbo further downstream near the town of Quxu, around 10 kilometers north of Lake Yamdrok.

In its upper reaches, the valley is narrow, fed by the three converging rivers known as the Phak Chu, the Phongdohla Chu, and the Reting Tsangpo. Around 450 kilometers long, the Lhasa River Valley gets wider as it heads west, with one of the widest points being where the city of Lhasa is located. Surrounded by the dominant peaks of the Nyenchen Tanglha Mountains, the area around Lhasa is a marshy part of the valley, which supports a wide variety of bird life and wildfowl, many of which are migratory birds that head for the plateau during the summer months, moving further south as the winter weather turns colder.

Lying in the valley is the Tibetan capital, built on what was once part of the marshland that was reclaimed more than 1,300 years ago. The area of the city is dominated by three natural hills, Marpori (Red Mountain), Chakpori (Iron Mountain), and Barmari (Rabbit Mountain).