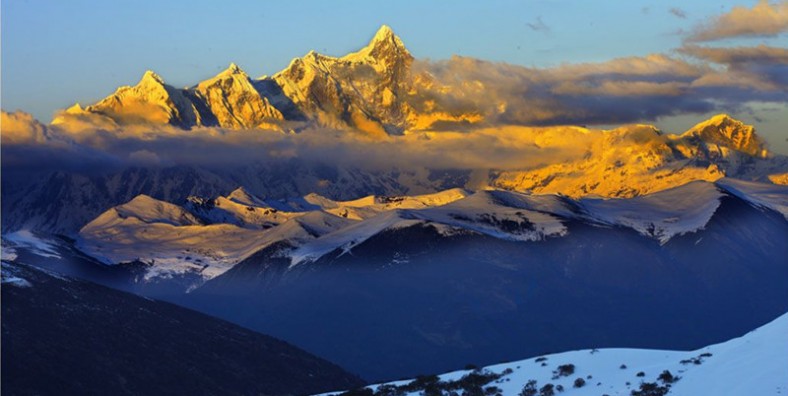 Namcha Barwa or Namchabarwa is a mountain in the Tibetan Himalaya(喜马拉雅山). The traditional definition of the Himalaya extending from the Indus River to the Brahmaputra would make it the eastern anchor of the entire mountain chain, and it is the highest peak of its own section as well as Earth’s easternmost peak over 7,600 meters.

History and Development of Mount Namjagbarwa

Namcha Barwa was located in 1912 by British surveyors but the area remained virtually unvisited until Chinese alpinists began attempting the peak in the 1980s. Although they scouted multiple routes, they did not reach the summit. In 1990 a Chinese-Japanese expedition reconnoitered the peak. Another joint expedition reached 7460 meters in 1991 but lost member Hiroshi Onishi in an avalanche.The next year a third Chinese-Japanese expedition established six camps on the South Ridge over intermediate Nai Peng (7,043meters) reaching the summit October 30. Eleven climbers climbed to the summit. U.K. Alpine Club’s Himalayan Index lists no further ascents.

Frank Kingdon-Ward described in the 1920s, “a quaint prophecy among the Kongbo Tibetans that Namche Barwa will one day fall into the Tsangpo gorge and block the river, which will then turn aside and flow over the Doshong La . This is recorded in a book by some fabulous person whose image may be seen in the little gompa monastery at Payi, in Pome. ”

Namcha Barwa is in an isolated part of southeastern Tibet rarely visited by outsiders. It stands inside the Great Bend of the Yarlung Tsangpo River as the river enters its notable gorge across the Himalaya, emerging as the Siang and becoming the Brahmaputra. Namcha Barwa’s sister peak Gyala Peri 7,294 meters rises across the gorge 22 km to the NNW. In addition to being one of the highest mountains in the world, Namcha Barwa is also the third most prominent peak in the Himalayas after Mount Everest and Nanga Parbat.

1. Car– You can drive all the way from Lhasa to Bayi Town. It’s about 440 km in all. Then drive along the Niyang River to Mainling County.
2. Boat– The boat starts in Bayi Town. The round way ticket is about CNY 580 per person.
3. Trek– Most trekkers start in Mainling County and trek along Yarlung Tsangpo River to the lower reaches.
4. Bus– Take a bus at Lhasa Station to Bayi, which leaves at 8:00 in the morning at earliest about CNY 50 per person.
5. Yacht– It goes from the scenic center all the way to Mainling County. This service is only available in the duration of Apr. to Nov. 6 boats will be dispatched at 8:00 and 12:00 respectively.