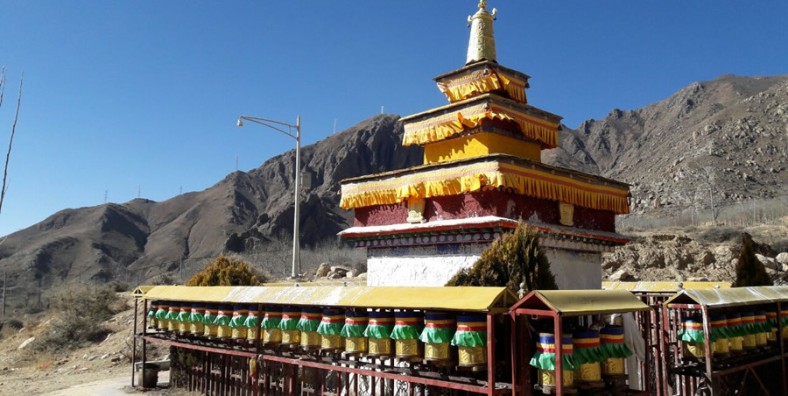 Nechung Monastery, Nechung Gompa  or Nechung Chok is the seat of the State Oracle of Tibet.

It is also referred to as Sungi Gyelpoi Tsenkar, the “Demon Fortress of the Oracle King.”The main temple of Nechung monastery, with pillar or doring, 2 intense burners and 2 stone lions behind, before 1950

Main Temple
It is about 10 minutes walk down from Drepung Monastery, and was the residence of the three-headed, six-armed Pehar, the chief protector of the Gelugs (Yellow Hat sect) and the seat of the State Oracle or Nechung Oracle.[2] It is medium-sized temple which used to house about a hundred monks.

History and Functions
It was the seat of State Oracle until 1959 when he fled with the Dalai Lama to India who now lives in exile in Dharamsala, India. The Dalai Lamas traditionally always consulted him before making an important decision.

It was the residence of the Protector Pehar, a deity of the Horpas, who lived to the east of (Lake) Kokonor. According to tradition, he is held to have been originally brought to Samye Monastery by Padmasambhava who bound him to protect the dharma. An alternative story is that he was brought back by a Bon general, Tara Lugong, who took possession of the meditation school near Kanchow of the Bhaţa Hor, a tribe of Uighurs, about the end of the 8th century CE. Pehar was regarded as the guardian deity of the treasures of Samye Monastery and, later, as the ‘protector of religion’.

Nechung, Tibet.JPG
During the time of Lobsang Gyatso, the Fifth Dalai Lama (r. 1642-1682), Pehar was first moved from Samye to Tse Gugtang and then to the present site of Nechung Monastery.

Although the State Oracle is a Nyingma monk, he has been adopted by the Gelugpas and is now chosen for his receptivity to possession by Pehar during trance.He is considered to be the medium of Dorje Drakden, one of Pehar’s aspects.

When the State Oracle is possessed by Pehar, he becomes very agitated, with tongue lolling, bloodshot eyes and displays superhuman strength, lifting heavy weights, twisting swords, etc. He mumbles words which are recorded and then interpreted by monks and also blesses grain which is thrown to the crowd.

Unlike most Central Asian shamans, who are thought to leave their bodies when in a trance-like state and travel to the land of the spirits from where they bring back messages, Tibetan oracles act “as a mouthpiece for the gods or spirits who possess him and speak through him, very often without his own knowledge of what is being said, answering directly the questions of those who consult him.” The tradition of oracles was inherited from the pre-Buddhist religion of Tibet, Bön. The “great” Fifth Dalai Lama was “the first to institutionalise the State Oracle of Nächung.”

Nechung was almost completely destroyed during the Cultural Revolution and annexation of Tibet by China, though now, it has been largely restored and there is a huge new statue of Guru Rinpoche (Padmasambhava) on the second floor. There is a college of debate to the east of Nechung which is once again attended by young students.

A new Nechung Monastery has been built in Dharamsala, India.

Attraction Transportation
You can fly to Lhasa Gonggar International Airport(拉萨贡嘎国际机场）and then take the bus to Quxu County. And then you can drive by yourself or follow the leader to get to.

One thought on “Nechung Monastery, Lhasa”