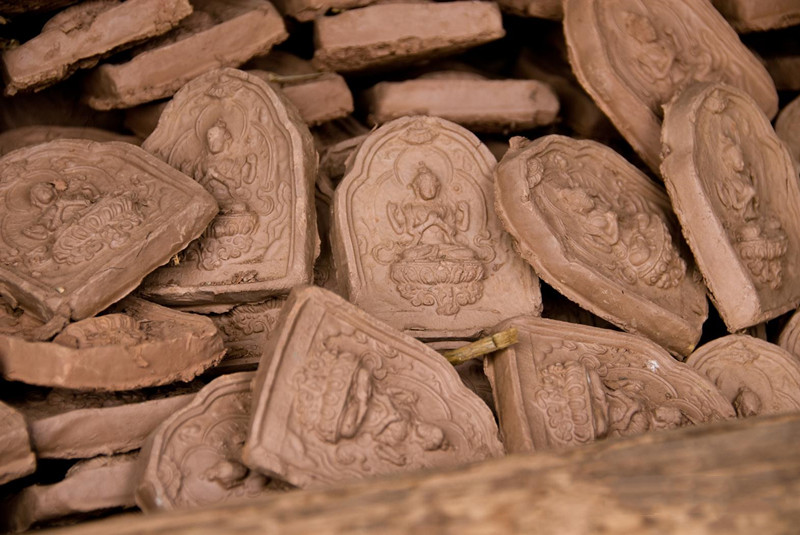 For Tibetan craftsman Kelsang Tsering, the highlight of his career is bringing clay Buddha figurines, which are mostly seen in monasteries, to common households.

From clay selection and sculpting to wiping and coloring, Kelsang Tsering is busy creating a Buddha clay statue in his workshop in the Tibetan Autonomous Prefecture of Huangnan.

Kelsang Tsering started learning how to create clay sculptures at the age of 17. “Our teacher guided us to observe Buddha statues in monasteries, encouraging us to memorize their characteristics,” he said.

He added that from the basics of Thangka painting to sculpture, it usually took more than 10 years for those learning the art to fully master it.

At the age of 23, he lived in various monasteries from one month to six months to carve statues during the day and practice drawing in the dim light of a lamp at night.

“When I was a child, my father always carried a dark green haversack with wooden carving tools and kits in it. His hands were always covered with dirt,” said Pema Dorje, Kelsang Tsering’s son.

“There are no shortcuts to being a craftsman. Only through practice can we create high-quality artwork,” Kelsang Tsering said.

The key materials of a clay sculpture include red clay, powdered coral and pearls and bits of cotton. Over the past 30 years, Kelsang Tsering has created thousands of Buddha clay sculptures based on Buddhist stories and ancient books.

Many delicate Buddha sculptures in monasteries on the plateaus were created by Kelsang Tsering. With continuous development, Regong arts, including clay sculptures, have become smash hits and hot-selling items.

To accommodate this trend, Kelsang Tsering started an art and culture company in 2012, attracting 50 apprentices and 70 employees. Among them, 60 employees are from poverty-stricken households. Each of them now receives a monthly salary of over 3,000 yuan (about 426.8 U.S. dollars).

The products have been sold to many provinces such as Gansu, Sichuan and Yunnan.

China has invested more than seven billion yuan in the protection of intangible cultural heritage since it adopted a law designed to preserve traditions in 2011.

The country has also stepped up efforts to build capacity for personnel of intangible cultural heritage preservation, with over 700 training programs launched attracting about 29,200 participants since 2015.

In Huangnan, there are more than 40,000 people working in the Regong arts industry, with an annual output value of 780 million yuan, official statistics showed.

“The company received over 500 orders this year. We sign up for training classes on intangible cultural heritage each year and get a lot of ideas and inspiration from them,” said Pema Dorje.

Under the influence of his father, Pema Dorje chose Thangka as his major and was admitted into the Qinghai Nationalities University in 2015. Now he helps his father manage the company and create cultural and innovative clay sculpture products.

“Clay sculptures are difficult for tourists to carry. I am trying to find a way to solve this problem and make them more accessible to common people,” he said.