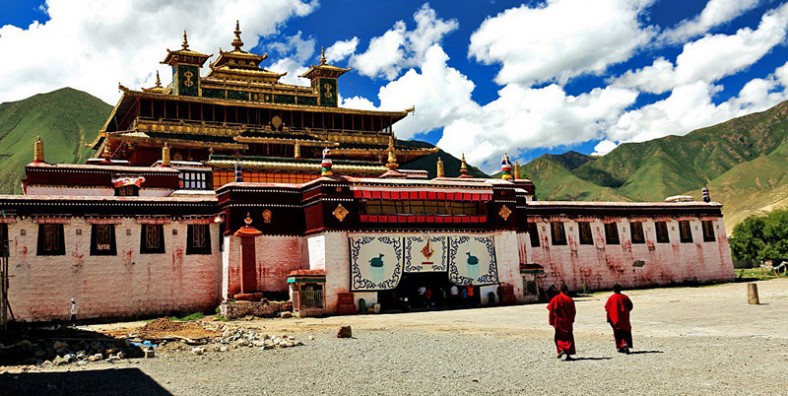 Chinese Name：桑耶寺
English Name:  Samye Monastery
Location: Located in Zhanang County(扎囊县), Lhoka Prefecture(山南市), Tibet Autonomous Region, China
Admission fee: 40 RMB
Opening hours: 9：00～16：00
About Samye Monastery
Samye was the first gompa (Buddhist monastery) built in Tibet. It was probably first constructed between 775-779 under the patronage of King Trisong Detsen of Tibet who sought to revitalize Buddhism, which had declined since its introduction by King Songtsen Gampo in the 7th century. The monastery is in Dranang(达南), Lhoka. It was supposedly modeled on the design of Odantapuri in what is now Bihar(比哈儿), India. The 18th century Puning Temple built by the Qianlong Emperor of Qing China in Chengde, Hebei(河北承德)  was modeled after Samye.
History and Development of Samye Monastery
According to tradition, the Indian monk Śāntarakṣita made the first attempt to construct the monastery while promoting his sutra-centric version of Buddhism. Finding the Samye site auspicious, he set about to build a structure there. However, the building would always collapse after reaching a certain stage. Terrified, the construction workers believed that there was a demon or obstructive tulku in a nearby river making trouble. When Shantarakshita’s contemporary Padmasambhava arrived from northern India, he was able to subdue the energetic problems obstructing the building of Samye. According to the 5th Dalai Lama, Padmasambhava performed the Vajrakilaya dance and enacted the rite of namkha to assist Trisong Detsen and Śāntarakṣita clear away obscurations and hindrances in the building of Samye, he went on to say that after Padmasambhava consecrated the ground he erected a thread-cross — a web colored thread woven around two sticks — to catch evil. Then the purifying energy of his dance forced the malevolent spirits into a skull mounted on top of a pyramid of dough. His tantric dance cleared away all the obstacles, enabling the monastery to be built in 767. The dance was memorialized by the construction of Vajrakilaya stupas — monuments honoring the ritual kilya (purba) daggers — at the cardinal points of the monastery, where they would prevent demonic forces from entering the sacred grounds. The abovementioned quotation makes reference to the relationship of the kīla to the stupa and mentions torma and namkha. Moreover, the building of Samye marked the foundation of the original school of Tibetan Buddhism, the Nyingma(宁玛派). This helps explain how Padmasambhava’s Tantra-centric version of Buddhism gained ascendence over the sutra-based teaching of Śāntarakṣita. Pearlman succinctly charts the origin of the institution of the Nechung Oracle. When Padmasambhava consecrated Samye Monastery with the Vajrakilaya dance, he tamed the local spirit protector, Pehar Gyalpo, and bound him by oath to become the head of the entire hierarchy of Buddhist protective spirits. Pehar, later known as Dorje Drakden, became the principal protector of the Dalai Lamas, manifesting through the Nechung Oracle.
The original buildings have long disappeared. They have been badly damaged several times — by civil war in the 11th century, fires in the mid 17th century and in 1826, an earthquake in 1816, and in the 20th century, particularly during the Cultural Revolution. As late as the late 1980s pigs and other farm animals were allowed to wander through the sacred buildings. Each time it has been rebuilt, and today, largely due to the efforts of Choekyi Gyaltsen, 10th Panchen Lama from 1986 onward, it is again an active monastery and important pilgrimage and tourist destination.
Main Attractions- Samye Monastery
Samye Monastery is laid out on the shape of a giant mandala, with the main temple representing the legendary Mount Meru in the centre. Other buildings stand at the corners and cardinal points of the main temple, representing continents and other features of tantric Buddhist cosmology.
In corners are 4 chörtens – white, red, green (or blue) and black and there are 8 main temples, the main temple is full of Tibetan religious art in mural and statue forms, as well as some important relics. Many Tibetan Buddhists come on pilgrimage to Samye, some taking weeks to make the journey.
Attraction Transportation
You can fly to Lhasa Kongga International Airport(拉萨贡嘎国际机场）and then take the bus to Lhasa. There are some bus going to Samye Monastery directly from Lhasa.
Attraction Travel Tips
1. Traveling Hours: 2～3 hours
2. Traveling Seasons: All year
3.  High Altitude Sickness Avoiding: Bring enough water and some thick clothes, eating more fruits and vegetables rich in vitamins and so on.
4.Pay attention to respect the local customers in the monastery.