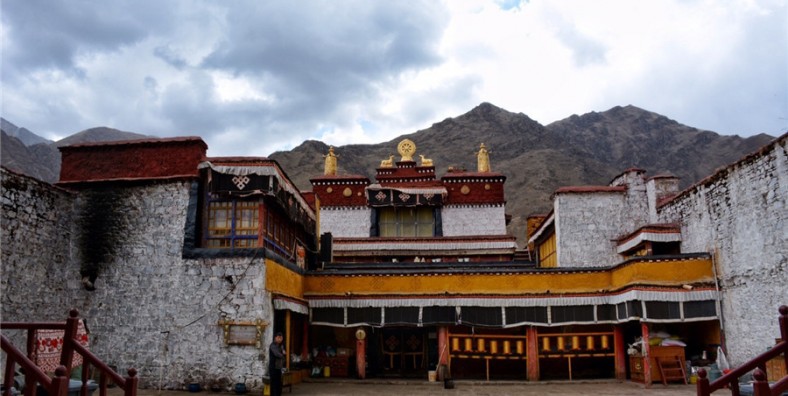 Little-known Attractions in Tibet – Sangpu Monastery
Before established Sangpu Monastery, Atisha (ancient Indian monk and the founder of Kardam Sect) pointed the place of Sangpu Monastery with his fingers and told his first great disciple that, it showed a shape of 8 great auspicious. The middle part looked like a sea snail and the space overhead showed a golden religious auspicious. According to the historical record, Atisha also pointed out a sacred mountain of Sakyamuni (the founder of Buddhism) in the east part of Sangpu Monastery area. Also, there are two other sacred mountains of Manjushri and Maitreya Buddha respectively standing on both sides of the scared mountain of Sakyamuni. In addition, there are two another sacred mountains respectively standing in the north and the south part.

So it is regarded as the holy place of Tibetan Buddhists by people. But Atisha didn’t let his disciple to tell others. Just like the name of Sangpu Monastery, Sang literally means the “secret” in Tibetan language. When the times and destiny come properly, the first great disciple of Atisha established the Sangpu Monastery with others later on.

At that time there are 13 sermon halls in Sangpu Monastery. There are 3 great Buddha statues, 8 great Bodhisattva statues, and 16 Arhat statues in the largest sermon hall. They three great Buddha statues are Sakyamuni Statue, Dipankara Buddha Statue and Maitreya Buddha Statue. All the statues are 6.8 meters high. The Bodhisattva statues are all 3.2 meters high. The Arhat statues are all 3.2 meters high, too. In addition, there are many precious Buddhist scriptures respectively written by the gold and silver, and 13 dagobas in the largest scripture hall, etc.

A local proverb says that if I don’t take part in the summer scripture ceremony, I must be dead. It witnessed the great period of prosperity of Sangpu Monastery. The summer sermon ceremony is usually held in Lunar March 30th to Lunar May 15th every year. Many devout believers would come here to worship.

Sangpu Monastery actually owned hundreds of small branch monasteries, but most of older ones were damaged as the historical reasons. They are rebuilding again by the Living Buddha and other Buddhists of Sangpu Monastery.

As a matter of fact, I have to say this, Sangpu Monastery looks more magnificent and solemn after time and tide and the historical development. Even though it was once damaged for some reasons, it still survived and developed well. It almost stands for the wisdom and knowledge of Tibet Buddhism.