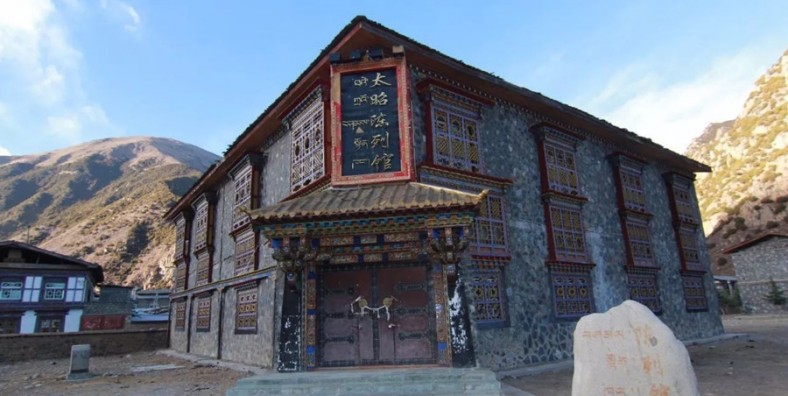 Tibetan Village Museum- Taizhao Exhibition Hall is located in Gongbogyamda County, Nyingchi Prefecture, and it is in the Tang – Bo Ancient Road and Taizhao Ancient Town. Taizhao has been formerly known as Yamda(江达), it means that “the first village of a hundred villages” in Tibetan language.

Tang – Bo Ancient Road（唐蕃古道）is shortened from Tang Dynasty – Tubo Dynasty Ancient Road. It is not only a well known important ancient traffic road in Chinese history, but also the way which must be passed to the Kingdom of Nepal, India, Qinghai Province, and Tibet Region, etc. Tang – Bo Ancient Road is originated from Xian City of Shanxi Province to Lhasa City of Tibet Autonomous Region by way of Gansu and Qinghai. It is approximately 3000 kilometers long. It is also highly praised as the southern route of the Silk Road as it stretches throughout the roof of the world – Tibet and the west part of China. It is significant to connect the southwest part of China, too.

Since 2005, the government of Gongbogyamda has invested more than 20 million RMB in the protection and tourism development of Taizhao Ancient Town and has set up a museum of Taizhao integrating folk customs, history and red tourism. It is located at 318 State Road for visitors to travel. Taizhao Ancient Town（太昭古城） is a comprehensive scenic spot mingled with the tourism elements of eating, accommodation, traveling, shopping and entertainment as well as the folk customs, history and culture, the red tourism in one.