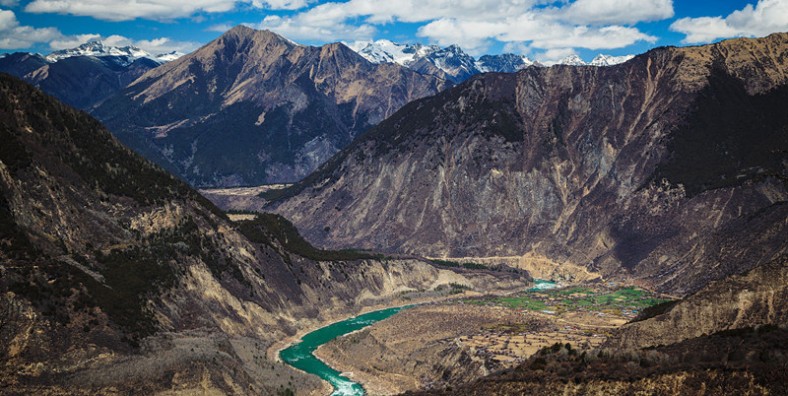 Yarlung Tsangpo Grand Canyon or Yarlung Zangbo Grand Canyon or simply the Tsangpo Canyon, Brahmaputra Canyon or Tsangpo Gorge, along the Yarlung Tsangpo Rive(雅鲁藏布江) in Tibet, China, is the deepest canyon in the world, and at 504.6 km (314 miles) is slightly longer than the Grand Canyon in the United States(美国大峡谷), making it one of the world’s largest. The Yarlung Tsangpo (Tibetan name for the upper course of the Brahmaputra) originates near Mount Kailash(凯拉什山) and runs east for about 1700 km, draining a northern section of the Himalayas(喜马拉雅山) before it enters the gorge just downstream of Pei, Tibet near the settlement of Zhibe. The canyon has a length of about 150 miles (240 km) as the gorge bends around Mount Namcha Barwa (7782 meters) and cuts its way through the eastern Himalayan range. Its waters drop from about 2,900 m near Pei to about 1,500 meters at the end of the Upper Gorge where the Po Tsangpo River enters. The river continues through the Lower Gorge to the Indian border at an elevation of 660 meters. The river then enters Arunachal Pradesh and eventually becomes the Brahmaputra.

Western interest in the Tsangpo began in the 19th century when British explorers and geographers speculated where Tibet’s east-flowing Tsangpo ended up, suspecting the Brahmaputra. Since British citizens were not allowed to enter Tibet they recruited Indian “pundits” to do the footwork. Kinthup from Sikkim entered the gorge near Gyala, but it proved to be impenetrable. In 1880 Kinthup was sent back to test the Brahmaputra theory by releasing 500 specially marked logs into the river at a prearranged time. His British boss Captain Henry Harman posted men on the Dihang-Brahmaputra to watch for their arrival. However, Kinthup was sold into slavery, escaped, and ended up employed at a monastery. On three leaves of absence he managed to craft the logs, send a letter from Lhasa with his new intended schedule, and send off the logs. Four years had passed. Unfortunately his note to alert the British got misdirected, his boss had left India, and nobody checked for the appearance of the logs.
In 1913, Frederick Marshman Bailey and Henry Morshead launched an expedition into the gorge that finally confirmed that the Tsangpo was indeed the upper Brahmaputra. Frank Kingdon-Ward started an expedition in 1924 in hopes of finding a major waterfall explaining the difference in altitude between the Tsangpo and the Brahmaputra. It turned out that the gorge has a series of relatively steep sections. Among them was a waterfall he named “Rainbow Falls”, not as big as he had hoped.
The area was closed after China invaded Tibet and disputed the location of the border in the Sino-Indian War. The Chinese government resumed issuing permits in the 1990s. Since then the gorge has also been visited by kayakers. It has been called the “Everest of Rivers” because of the extreme conditions.[6] The first attempt was made in 1993 by a Japanese group who lost one member on the river. In October 1998 an expedition sponsored by the National Geographic Society attempted to kayak the entire gorge. Troubled by unanticipated high water levels, it ended in tragedy when Doug Gordon was lost. In January–February 2002 an international group with Scott Lindgren, Steve Fisher, Mike Abbott, Allan Ellard, Dustin Knapp, and Johnnie and Willie Kern completed the first full descent of the upper Tsangpo gorge section.

The gorge has a unique ecosystem with species of animals and plants barely explored and affected by human influence. Its climate ranges from subtropical to Arctic. The highest temperature in Tibet is 43.6 °C (110.5 °F) and is recorded near the border of India at an elevation of approximately 600 meters above sea level. The rare taking is one of the animals hunted by the local tribes. The largest waterfalls of the gorge (藏布巴东瀑布群) were visited in 1998, by a team consisting of Ken Storm, Hamid Sarder, Ian Baker and their Monpa guides. They estimated the height of the falls to be about 108 feet (33 m). The falls and rest of the Pemako area are sacred to Tibetan Buddhists who had concealed them from outsiders including the Chinese authorities. In 2005 Chinese National Geography named them China’s most beautiful waterfalls. There are two waterfalls in this section: Rainbow Falls and Hidden Falls.

While the government of the PRC has declared the establishment of a “Yarlung Tsangpo Grand Canyon National Reservation”, there have also been governmental plans and feasibility studies for a major dam to harness hydroelectric power and divert water to other areas in China.[citation needed] The size of the dam in the Tsongpo gorge would exceed that of Three Gorges Dam as it is anticipated that such a plant would generate 40,000 megawatts electricity, more than twice the output of Three Gorges. It is feared that there will be displacement of local populations, destruction of ecosystems, and an impact for downstream people in India and Bangladesh.[14] The project is criticized by India because of its potential negative impact upon the residents downstream.

However, another type of dam, the inflatable, is possible that would obviate any necessity for a huge concrete structure. R.B. Cathcart, in 1999, first suggested a fabric dam—inflatable with freshwater or air—could block the Yarlung Tsangpo Canyon upstream of Namcha Barwa. Water would then be conveyed via a hard rock tunnel to a point downstream from that mountain, affording the generation of tens of thousands of megawatts—power which would have to be distributed internationally and equitably through a Himalayan power grid.

Nyingchi Mainling Airport is located in the Mainling County, 40 kilometers north of Bayi County. Up to now, there are flights to Lhasa, Chengdu and chongqin. The airport shuttle bus costs 25 yuan per person and the departure time depends on the arrival time of flights.

1. Traveling Hours: 1~2 days
2. Traveling Seasons: All year, and the best time to travel is March and April
3.  High Altitude Sickness Avoiding: Bring enough water and some thick clothes, eating more fruits and vegetables rich in vitamins and so on.
4. Pay attention to respect the local customers.