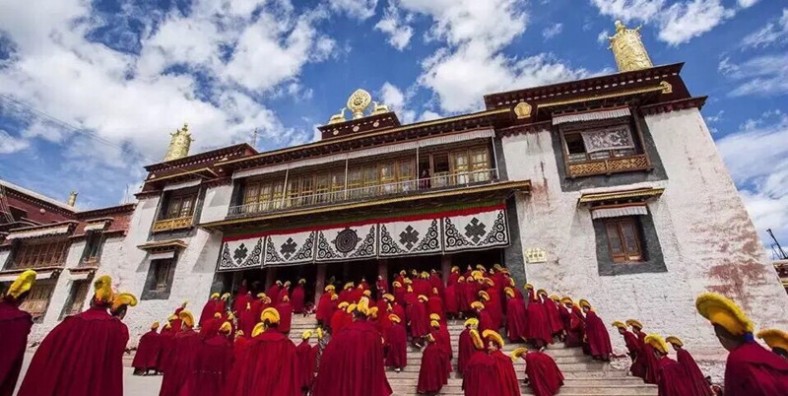 Location: Malashan Mountain, Chamdo, Tibet, China
Reasons to visit
High standard mural and thangka are presreved in it.
Our Ratings
Opening Hours
The whole day, some temples close at 16:00

The main architecture of the monastery has been preserved well. In the sutra hall, there are hundreds of various Buddhas and statues of eminent monks, such as Sakyamuni, Tsongkhapa and Atisha. There are also murals covering over 1000 square meters and lots of Thangkas, which represent the highest art level in Chamdo.

The grand festival for inviting Byams-pa of Jampaling Monastery is in Feb. 25 of the Tibetan Calendar (one of the date between Mar. and April of solar calendar). The festival has a history of more than 500 years. During the festival, there will be two activities: one is exhibiting Buddha Tangka and statue of Byams-pa; the other is pilgrimage. Thousands of monks chant sutra this day and tens of believers come to show their worship to Byams-pa.

History[edit]
Chamdo was visited by Tsongkhapa in 1373 who suggested that a monastery be built there. Galden Jampaling Monastery was constructed between 1436 and 1444 by a disciple of Tsongkhapa, Jansem Sherab Zangpo.[1] It is also known as the Changbalin or Qiangbalin Si Monastery. At its height it contained five main temples and housed some 2,500 monks. According to tradition there were 3000 monks with Jangsem Sherab Zangpo when establishing the monastery, and some more than 2000 at the beginning of the 19th century. It was destroyed in 1912 but the main hall (which was used as a prison) and two other buildings survived, and it was rebuilt in 1917 after the Tibetan army retook Chamdo. It now houses about 800 monks.[2][3]

【Admission fee】: Free
【Transportation tips】:
You can walk up along the upward slope at the square opposite to Changqing Street. You can also take taxi, which costs you in 10 Yuan.
【Photographing tips】:
To take the picture that the monastery surrounded by two river which is very grand, you need to shoot from the mountainside of Damala Mountain. You can take the picture when you pass here by bus or car. It is easy to find the good angle here.
Best time to visit Galden Jampaling Monastery:
Chamdo is close to Bangda Airport. As the monastery is located in valley, each year, from Nov. to Mar. heavy snow seals the mountain passes. And in July and August, it is wet season when debris flow and landslides are easily occurs. May, June and September is the best time to visit Chamdo.