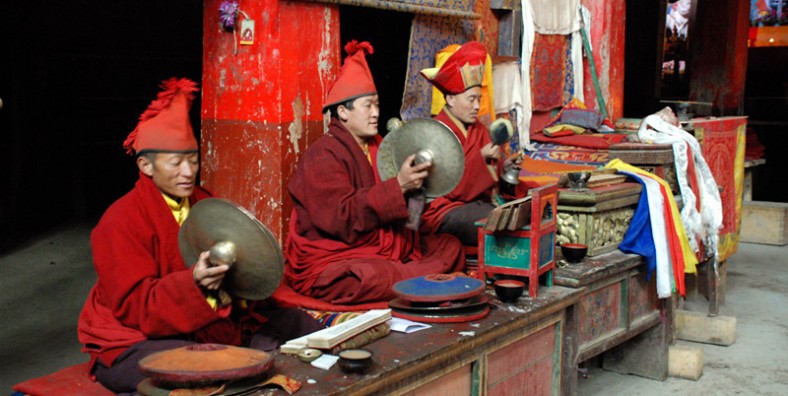 Karma Gon Monastery, the original monastery of the Karma Kagyu sect of Tibetan Buddhism, was founded in the 12th century by Düsum Khyenpa, the 1st Karmapa Lama in eastern Tibet at the age of 76. Karma Gon is located on the eastern bank of the Dzachu River in Karub District, Chamdo Prefecture, Tibet Autonomous Region. Karma Dansa was the cradle of the karma kagyupas. When established the Karmapa had gathered 1000 monks around him here. Karma Gon was named as Karma Dansa as an administrative unit and the Chinese Ming Court enlarged the monastery’s jurisdiction by adding the Mekong’s middle and upper reaches. It was then also called Gama Dansa Si in Chinese.

The History of Karma Gon Monastery

History records that Deshin Shekpa, 5th Karmapa Lama gave the title of Situ to his disciple, Chokyi Gyaltsen (1377–1448), and appointed him as the Master of Studies at Karma Gon. Earlier than this incarnation, there were two others namely, Yehse Nyingpo and Ringowa Ratnabhadra. After Situ Chokyi Gyaltsen, the second Situ in the list was Tashi Namgyal (1450–97) who was ordained Thongwa Dönden, 6th Karmapa Lama and put in charge of the Karma Gon.

The third Situ was Tashi Paljor (1498–1541) followed by the Situ Chokyi Gocha (1542–85); both were involved in developing the Karma Gon Monastery. They are credited with creating a fine library, apart from embellishing the monastery walls with rare paintings and carvings. Most of these were reportedly destroyed during the Cultural Revolution by the communist regime, except for a few old buildings that still remain. The fourth Situpa was Situ Tashi Paljor who identified Miko Dorjee as the 8th Karmapa and who also became his teacher. The Fifth Situpa Chokyi Gyaltsen was honoured with a red Crown by Wangchuk Dorje, 9th Karmapa Lama for his spiritual attainments. The Tai Situpas with their roots in the Kham region of eastern Tibet always played a significant role in identifying the Karmapa Incarnations. The sixth Tai Situpa was Mipal Chogyal Rabten (1658–82) known for his miracle performing achievements, which was followed by Mawe Nyima (son of King Lin) who had a premature death. The eighth Tai Situpa, Chokyi Jungne (1700–74) was the most distinguished scholar who went to establish Palpung Monastery in 1717 after which the importance of the Karma Gon monastery has waned.

The hundred-pillar Assembly Hall was once one of the largest in Tibet, containing 12 chapels and magnificent murals illustrating the deeds of the Buddha and historical scenes relating to the Karma Kagyu school of Tibetan Buddhism. It used to contain three gilded brass images of the ‘Buddha of the Three Times’ in its inner sanctum and there was a large central image of Shakyamuni Buddha on a sandalwood throne which 8th Karmapa personally designed. The surviving buildings show a remarkable synthesis of Tibetan, Naxi (Jang) and Chinese styles which attest to the influence of the monastery as far south as Lithang. There a number of statues and other relics, some of them ancient, and an upstairs room sealed off with a curtain of chain mail where 100 monks study the commentaries of the 8th Karmapa.

Adjacent to the great temple, in the Khandro Bumtang meadow, where Karmapas would perform the Black Hat ceremony, there are three ancient stupas, containing the relics of the First Karmapa, the First Situ Rinpoche and Wangchuk Chobar, who was a senior student of the former. Behind these is a chapel containing the gilded stupa of Karma Pakshi (1204–1339), replete with sacred tooth relics, and a newly build [sic] monastic college which will hold 500 monks … ruined hermitages are in the crags above the temple, alongside that of the first Karmapa, which is nowadays marked with prayer flags. There are, however, two active retreat centers above the monastery, dedicated respectively to the practices of Chodruk and Dorje Drolo.

In the 13th century, Karma Pakshi, 2nd Karmapa Lama, considered a child prodigy, had become an ordained monk at the age of 22. He had received the complete series of Kargyu teachings and was the dharma protector of Kargyu lineage. He was the 2nd Gyalwa Karmapa. During his visit to this monastery, after noting the poor state of repair of the monastery, he had ensured during his time, complete restoration of the monastery to its original state.

By Air
Chamdo Bangdad Airport, situated in Chengdu and at an altitude of 4300 m above sea level is the highest airport in the world. It has now started takes traffic from Lhasa airport. Qamdo town is around 128 km away from here that you can travel by road.

By Road
Road transportation is more preferred than air travel. Buses to all the major cities of Tibet originate from here. There is also a connection to cities of China and Nepal.

Local Transport
Taxis are the major mode of transport in the city. You can also avail the services of pedicab that you might more suitable to explore the city.