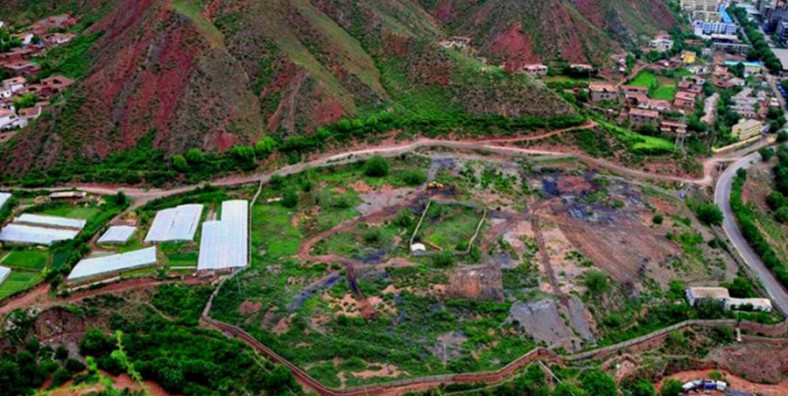 Karub Ruins in Chamdo is located in Karub Village, Jagka District, about 12 kilometers southeast of Qamdo county seat, which is one of the three large primeval cultural ruins in Tibet from the New Stone Age. The total ruins of Neolithic Age that were discovered in Tibet include the ruins of Karub, Lesser Enda and Gyangqen in Chamdo. Among them, the Karub Ruins(Chinese name: 卡若遗址) are the earliest Neolithic Age remains so far found in Tibet. Most of the pottery displayed in the Tibet Museum was unearthed from Karub Ruins, followed by pottery unearthed from Gunggar Qamgo Gully. The pottery unearthed from the Karub Ruins is on a large scale in respect of both quantity and quality, and its shape, patterns and lines possess the typical characteristics of ceramic craftsmanship in the early times on the plateau.

The Karub Ruins have a history of 4,300-5,300 years, and among some of the unearthed 20,000 pottery shards, 1,234 pieces can be recognized. It basically exemplifies ceramics craftsmanship at the end of the Tibetan pre-historic period.

About the Pottery Wares in Karub Ruins

The pottery wares in the Karub Ruins were all shaped by hand. Some small wares might be kneaded into shape by hand, and the large wares were shaped by means of earth strips to winding construct and earth pieces to paste up. The pursuit of practicability of pottery in the earliest times gradually transformed to the pursuit of artistic effect in shape.

Archeological study shows that, on some pottery wares in Chamdo, there are marks of repairing. On the edge of cracks in the wares, holes for repairing can be seen, and some are on the edge of the bottom, which implies that the bottom of such wares often fell off because of an ability to bear any weight at that time. These repair marks help verify the importance of pottery in daily life and people cherished care of pottery at that time.

Among the pottery unearthed from the Karub Ruins, there is a “double-body pottery pot” that is also called as “double-connected pottery pot with carved lines”. It is 18.7 cm high and 29.2 cm wide. Its opening diameter is 11CM and its bottom diameter is 8CM. This pot was made of yellow pottery with fine sand. It is in shape of double-body and connected opening. The opening is round and the edge turns outward. The two bellies are in an elliptical shape; a short button was stuck to the outside on each side, and the bottom is flat. The neck was carved with double curving lines; one belly was carved with double inverted V lines, and the other belly was carved with rhombus lines. Black pottery was painted as adornment in spaces between lines, so it is also called as pottery red and black colorful painted double-body pot. The shape is special, the line adornments are neat, and it implies the special aesthetic interests of its creator. It is a significant highlight among pre-historic cultural relics. Some people think its shape seems like two animals standing face to face, and a pair of buttons with a hole on the shoulder seems like the tails of the animals.

The pottery ware unearthed from Karub Ruins involves religious effects. As the birthplace of various original religious doctrines such as the Bon religion in Tibetan areas, many relics on the Qinghai-Tibet Plateau are endowed with strong religious coloring. Some pottery segments were painted in red and some pottery was used to carry paint. In the pre-historic period red was viewed as a symbol of life and strength, which represents the Tibetan ancestors’ veneration of life. The appearance of pottery is a significant symbol of human’s entrance into the Neolithic Age from the Paleolithic Age.

By Air
Chamdo Bangdad Airport, situated in Chengdu and at an altitude of 4300 m above sea level is the highest airport in the world. It has now started takes traffic from Lhasa airport. Qamdo town is around 128 km away from here that you can travel by road.

By Road
Road transportation is more preferred than air travel. Buses to all the major cities of Tibet originate from here. There is also a connection to cities of China and Nepal.

Local Transport
Taxis are the major mode of transport in the city. You can also avail the services of pedi-cabs that you might more suitable to explore the city.