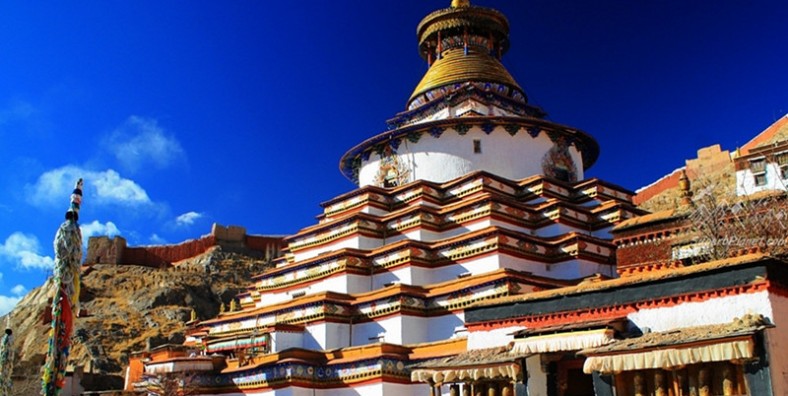 Kumbum has nine floors or tiers and each tier has unique chapels. The 76 chapels have images that form “a progressive hierarchy of three-dimensional manadalas, as outlined in the Sakyapa compilation known as the Drubtob Gyatsa, ensuring that the stupa encapsulates within it the entire spiritual path and gradation of the tantras”.

The first tier of the Kumbum has staircases at the cardinal points which lead to the second tier, with the main entrance being that from the southern side. The second tier has 20 chapels which house images of Kriyatantras in a clockwise order. The third tier has 16 chapels and also depicts images of Kriyatantras along with Caryatantras, arranged in a clockwise order. In the fourth tier, there are twenty chapels depicting images of Yogatantras in a clockwise order. The fifth tier has 12 chapels depicting lineage holders. In the sixth tier there are four chapels, which show Yogatantra deities. The seventh tier has a single chapel with 10 mandalas, a unique depiction of the “Father Class of Unsurpassed Yogatantras”. The eighth tier has also a single chapel but depicts 11 mandalas of “Mother Class of Unsurpassed Yogatantras”. The last and tenth tier has a single chapel, which has an idol of the Vajradhara Buddha but is “flanked by the masters of the Kalachakra”.

A Kumbum (Wylie: sku ‘bum “one hundred thousand holy images”) is a multi-storied aggregate of Buddhist chapels in Tibetan Buddhism. The most famous Kumbum forms part of Palcho Monastery.

The first Kumbum was founded in the fire sheep year 1427 by a Gyantse prince. It has nine lhakangs or levels, is 35 metres (115 ft) high surmounted by a golden dome, and contains 77 chapels which line its walls. Many of the statues were damaged during the Cultural Revolution but have since been replaced with clay images, though they lack the artistic merit of the originals. The 14th century murals showing Newar and Chinese influences, survived much better.

The Kumbum or great gomang (“many-doored”) stupa at Gyantse is a three-dimensional mandala meant to portray the Buddhist cosmos. The Kumbum, like other mandalas, which are portrayed by a circle within a square, enables the devotee to take part in the Buddhist perception of the universe and can depict one’s potential as they move through it. Mandalas are meant to aid an individual on the path to enlightenment. The Kumbum holds a vast number of images of deities throughout its structure with Vajradhara (Sanskrit:Vajradhāra, Tibetan: rdo rje ‘chang (Dorje Chang), English: Vajraholder), the cosmic Buddha, at the top.

“The lhakangs of the nine levels of the Kumbum, decreasing in number at each level, are structured according to the compendium of Sakya tantras called Drubtab Kantu. Thus each lhakang and each level creates a mandala, and the entire Kumbum represents a three-dimensional path to the Buddha’s enlightenment in terms of increasingly subtle tantricmandalas.”

The best known Kumbum is the Gyantse Kumbum, built in 1497 by a prince of Gyantse, but there are other surviving examples at Jonang, built by Dolpopa Sherab Gyaltsen and consecrated in 1333, and the Chung Riwoche Kumbun at Päl Riwoche, which was built by Thang Tong Gyalpo, who began work on it in 1449. A further one is at Kumbum Monasterynear Xining in Qinghai. The Great Stupa of Universal Compassion being built near Bendigo, Australia is modelled on the Gyantse Kumbum.