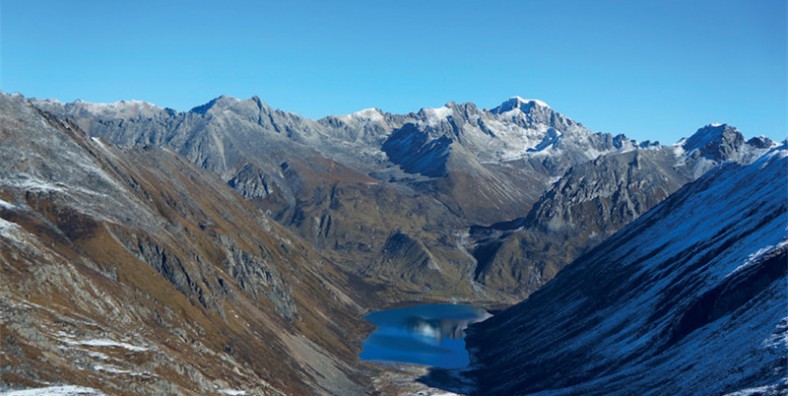 Lhamo La-tso is a small oval oracle lake where senior Tibetan monks of the Gelug sect go for visions to assist in the discovery of reincarnations of the Dalai Lamas. Other pilgrims also come to seek visions. It is considered to be the most sacred lake in Tibet. It is also known as “The Life-Spirit-Lake of the Goddess”, the goddess being Palden Lhamo, the principal Protectress of Tibet. Other names include: Tso Lhamo, Chokhorgyelgi Namtso and Makzorma and, on old maps, as Cholamo.

It is said that Palden Lhamo, as the female guardian spirit of the Lhamo La-tso promised the 1st Dalai Lama in one of his visions “that she would protect the reincarnation lineage of the Dalai Lamas.” Ever since the time of the 2nd Dalai Lama, who formalised the system, the regents and other monks have gone to the lake to seek guidance on choosing the next reincarnation through visions while meditating there.
The particular form of Palden Lhamo at Lhamo La-tso is Jemo Maksoma,  “The Victorious Queen who Turns Back Enemies”. The lake is sometimes referred to as “Palden Lhamo Kalideva”, which indicates that she is the (Buddhist) emanation of Kali, shakti of Shiva. Jemo Maksoma, also called Machik Pellha Shiwé Nyamche, this is an unusually peaceful form of Palden Lhamo.
The mountain to the south of Chokorgyel Monastery, Shridevi, is the “blue” residence of Palden Lhamo on which a sky burial site is located. The monastery was originally built in a triangular form to reflect the symbolism of its position at the confluence of three rivers and surrounded by three mountains and also represents the conjunction of the three elements of water, earth and fire, as well as the female principle of Palden Lhamo in the form of an inverted triangle.
Lhamo Latso is a brilliant azure jewel set in a ring of grey mountains. The elevation and the surrounding peaks combine to give it a highly changeable climate, and the continuous passage of cloud and wind creates a constantly moving pattern on the surface of the waters. On that surface visions appear to those who seek them in the right frame of mind.
It was here that in 1935, the Regent, Reting Rinpoche, received a clear vision of three Tibetan letters and of a monastery with a jade-green and gold roof, and a house with turquoise roof tiles, which led to the discovery of Tenzin Gyatso, the present 14th Dalai Lama.

Lhamo La-tso is in Gyaca County, Lhokha Province southeast of Lhasa, a four-hour hike from the Gelugpa Chokorgyel Monastery at an altitude of about 5,300 metres (17,400 feet) and covers an area of only about 2 square kilometres.

The highway traffic system is perfect; visitors can choose self-driving tour in Gyaca County. The closest airport is Lhasa Gonggar Airport about 203.1 km from Gyaca County; there are 259.3 km from Nyingchi Mainling Airport to Gyaca County. Tourist can travel by air firstly and then transfer to long-distance bus or self-driving  which is the major choice.