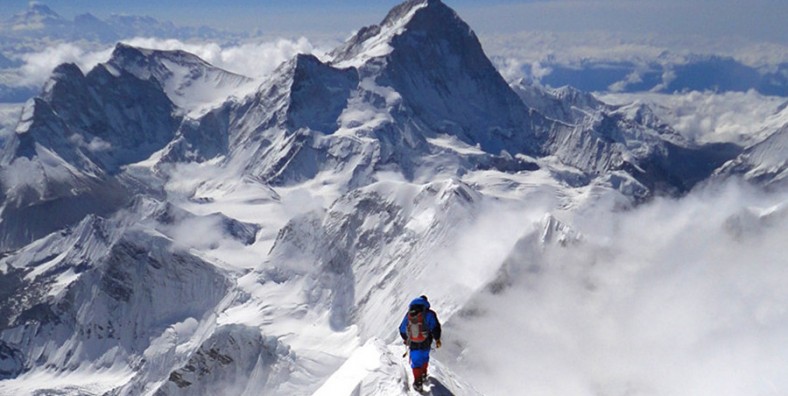 Chinese Name：珠穆朗玛峰
English Name：Mount Everest
Location: Located in the Mahalangur Himal （马哈兰格.喜玛尔）sub-range of the Himalayas（喜马拉雅山）. The international border between China (Tibet Autonomous Region) and Nepal（尼泊尔）runs across its summit point.
Admission fee: 180 RMB
Opening hours: All day
About Mount Everest
Mount Everest, known in Nepali as Sagarmāthā and in Tibetan as Chomolungma, is Earth’s highest mountain, the current official height of 8,848 meters (29,029 feets). The Tibetan name for Mount Everest is ཇོ་མོ་གླང་མ means “Holy Mother”, whose official Tibetan pinyin form is Qomolangma. It is also popularly romanised as Chomolungma and (in Wylie) as Jo-mo-glang-ma or Jomo Langma.

History and Development of Mount Everest
The current official height of 8,848 meters (29,029 feet), recognised by China and Nepal, was established by a 1955 Indian survey and subsequently confirmed by a Chinese survey in 1975. In 2005, China remeasured the rock height of the mountain, with a result of 8844.43 meters. There followed an argument between China and Nepal as to whether the official height should be the rock height (8,844 meters, China) or the snow height (8,848 meters, Nepal). In 2010, an agreement was reached by both sides that the height of Everest is 8,848 meters, and Nepal recognises China’s claim that the rock height of Everest is 8,844 meters. In 1865 ，Everest was given its official English name by the Royal Geographical Society（皇家地理学会）, upon a recommendation by Andrew Waugh, the British Surveyor General of India. As there appeared to be several different local names, Waugh chose to name the mountain after his predecessor in the post, Sir George Everest, despite George Everest’s objections.
The first recorded efforts to reach Everest’s summit were made by British mountaineers. As Nepal did not allow foreigners into the country at the time, the British made several attempts on the north ridge route from the Tibetan side. After the first reconnaissance expedition by the British in 1921 reached 7,000 meters (22,970 feet) on the North Col（北坳）， the 1922 expedition pushed the north ridge route up to 8,320 meters (27,300 feet), marking the first time a human had climbed above 8,000 meters (26,247 feet). Seven porters were killed in an avalanche on the descent from the North Col. The 1924 expedition resulted in one of the greatest mysteries on Everest to this day: George Mallory and Andrew Irvine made a final summit attempt on 8 June but never returned, sparking debate as to whether or not they were the first to reach the top. They had been spotted high on the mountain that day but disappeared in the clouds, never to be seen again, until Mallory’s body was found in 1999 at 8,155 meters (26,755 feet) on the north face. Tenzing Norgay and Edmund Hillary made the first official ascent of Everest in 1953, using the southeast ridge route. Tenzing had reached 8,595 meters (28,199 feet) the previous year as a member of the 1952 Swiss expedition. The Chinese mountaineering team of Wang Fuzhou, Gonpo, and Qu Yinhua made the first reported ascent of the peak from the north ridge on 25 May 1960.
Main Attractions-Mount Everest
Mount Everest attracts many climbers, some of them highly experienced mountaineers. There are two main climbing routes, one approaching the summit from the southeast in Nepal (known as the “standard route”) and the other from the north in Tibet, China. Mount Everest consists of sedimentary and metamorphic rocks that have been faulted southward over continental crust composed of Archean granulites of the Indian Plate during the Cenozoic collision of India with Asia. Yaks are often used to haul gear for Mount Everest climbs. They can haul 100 kg (220 pounds), have thick fur and big lungs.
Attraction Transportation
You can fly to Lhasa Kongga International Airport(拉萨贡嘎国际机场）and then take the bus to Shigatse（日喀则）or Lhatse（拉孜).
Attraction Travel Tips
1. Traveling Hours: 2～3 days
2. Traveling Seasons: All year
3.  High Altitude Sickness Avoiding: Bring enough water and some thick clothes, eating more fruits and vegetables rich in vitamins and so on.
4. Taking some good professional climbing equipments and trying to participate as a team in order to your safety.
5. One common piece of advice for those in the Everest region is to be on higher ground when around yaks and other animals, as they can knock people off the mountain if standing on the downhill edge of a trail.