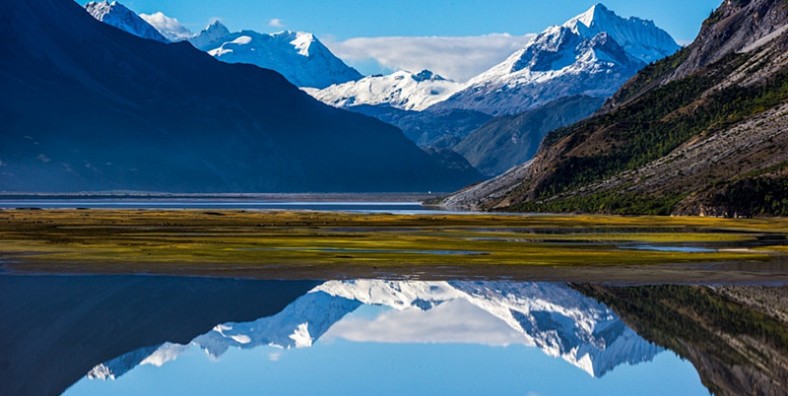 Rawu (also known as Rawok) is the name of a town in Baxoi County, Qamdo Prefecture, part of the Tibet Autonomous Region of China. It is at an altitude of 3,807 m. (12,490 ft).The modern town (population about 2,900) of about 20 shops and hotels services the loggers and nearby military base.

The town of Rawu is quite close to the original Tibetan village. To the southeast of the village is a large chorten and a small temple overlooking the beautiful Ngan-tso or Ranwu Lake, which is surrounded by magnificent snow-capped peaks and forests. It is 26 km by 2 km and consists of two sections connected by a small stream, is said to be Eastern Tibet’s largest lake and attracts many tourists.[2][3] There are small villages on both shores.[4] The second lake, known as Rawak tso, is 7 km from the town.[5] The main industry other than tourism is logging.

The name Ranwu Lake, called Ngan-tso in Tibetan, signifies a lake where zombies gather. It is located in the Ranwu Town, Chamdo Prefecture of the Tibet Autonomous Region, about 90 kilometers (56 miles) from Baxoi County in the east and 127 kilometers (79 miles) from Bome County in the west. Covering an area of approximately 22 square kilometers (8.5 square miles), Ranwu Lake is known as the largest lake in Eastern Tibet. The primary source of water is ice and snow from the mountains and glaciers on the three sides.

The long and narrow Ranwu Lake is divided into upper, middle and lower parts, which are actually three lakes connected by little streams. How was the lake formed? Legend has it that the lake came into being because of two oxen. A long time ago, two oxen fought a duel to the death in this region and turned into two mountains eventually. The middle part between these two mountains gradually formed a lake. A scientific explanation is that Ranwu Lake is a dammed lake formed because of mountain building activities.

Ranwu Lake is well-known for its tranquil and colorful water. It turns to dark blue, turquoise or any other colors in accordance with seasonal changes. Green meadows, white snow capped peaks, grey and white water birds, and clear blue sky reflect themselves in the lake water and form a charming picture. Visitors will be definitely stunned by this picturesque scenery.

About 10 kilometers (six miles) to the west of Ranwu Lake is a typical Eastern Tibetan style village named Waba Village. Houses here are mainly built of wood. It’s a good location to take photos. If time allows, visitors can also walk along the lake side to the nearby Laigu Glacier and Laigu village at its foot. They are another paradise for outdoor adventurers.

Where to Eat
There are some Sichan-style restaurants in Ranwu Town. Because of the isolated location, dishes can be pricey. Noodles are the common breakfast here. If you don’t like spicy food, please tell the cook not to add chili and pepper.

Where to Accommodate
Ranwu Transport Station Guest House
Ranwu Lake is off the beaten path, so the conditions are relatively primitive and not very clean, but still acceptable. A single room costs around CNY 20. A bed in the triple or quadruple room costs CNY 15.

Peace Hostel, at the east entrance of Ranwu Town
The facilities are better. A double room costs around CNY 30. It’s around CNY 20 for a single room. A bed in the triple or quadruple room costs CNY 10 to 15.

How to get to Ranwu Lake
There are buses from Chengdu, Chamdo, and Nyingchi that pass by Ranwu Town. Visitors can take one and get off at Ranwu. Or they can charter a car or share a car with other travelers from Baxoi County or Bome County to get there.