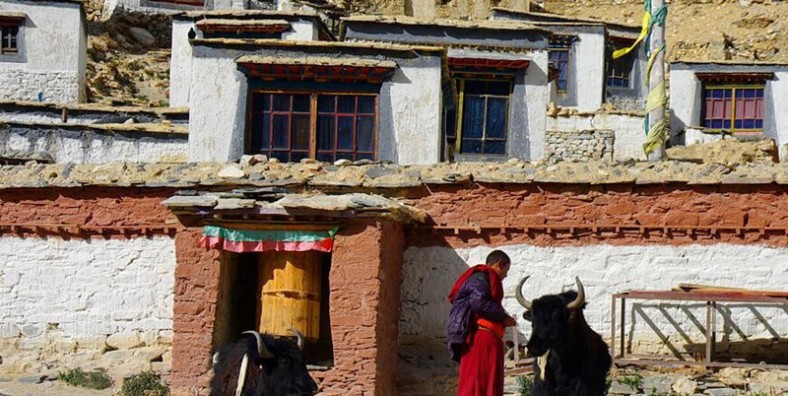 Chinese Name：绒布寺
English Name: Rongbuk Monastery
Location: Located in Tingri County（定日县）, Shigatse Prefecture（日喀则市）, Tibet Autonomous Region, China
Admission fee: 35 RMB
Opening hours: 9：00～16：00
About Rongbuk Monastery
Rongbuk monastery lies near the base of the north side of Mount Everest(珠穆朗玛峰) at 4,980 metres (16,340 feet) above sea level, at the end of the Dzakar Chu valley(春丕河谷). It is a Tibetan Buddhist monastery of the Nyingma(宁玛派) sect in Basum Township（巴松） and is claimed to be the highest monastery in the world.

History and Development of Rongbuk Monastery
Rongbuk Monastery was founded in 1902 by the Nyingmapa Lama Ngawang Tenzin Norbu in an area of meditation huts and caves that had been in use by communities of nuns since the 18th century. Rongbuk Monastery was completely destroyed by the excesses of China’s Cultural Revolution (1966-1976) by 1974, and was left in ruins for several years, as recorded by photo-journalist Galen Rowell in 1981. The monastery’s vast treasury of books and costumes, which had been taken for safekeeping to Tengboche, was lost in a 1989 fire. Since 1983 renovation work has been carried out and some of the new murals are reportedly excellent. Adjacent to the monastery there is a basic guest house  and small but cosy restaurant. According to Michael Palin, it now houses thirty Buddhist monks and thirty nuns, but another source reports that locals say there are only about 20 nuns and 10 monks, although previously there were about 500 monks and nuns living here. In 2011, Rongbuk Monastery was ranked at the top of CNN’s ‘Great Places to be a Recluse’.
Main Attractions-Rongbuk Monastery
In previous times, the Monastery became very active with Buddhist teachings at certain times of the year. It was, and is, the destination of special Buddhist pilgrimages where annual ceremonies are held for spectators coming from as far away as Nepal(尼泊尔) and Mongolia（蒙古）. These ceremonies were shared with satellite monasteries across the Himalaya also founded by the Rongbuk Lama. These ceremonies continue to this day, notably at the Sherpa Monastery（夏尔巴寺） at Tengboche（汤坡琦). Hermitage meditation caves dot the cliff walls all around the monastery complex and up and down the valley. Mani stone walls, carved with sacred syllables and prayers, line the paths.
Attraction Transportation
You can fly to Lhasa Kongga International Airport(拉萨贡嘎国际机场）and then take the bus to Shigatse（日喀则）. And then you can drive by yourself or follow the leader to the Base Camp.
Attraction Travel Tips
1. Traveling Hours: 2 hours
2. Traveling Seasons: Spring Season and Autumn Season
3.  High Altitude Sickness Avoiding: Bring enough water and some thick clothes, eating more fruits and vegetables rich in vitamins and so on.
4. Pay attention to respect the local customs in the monastery.