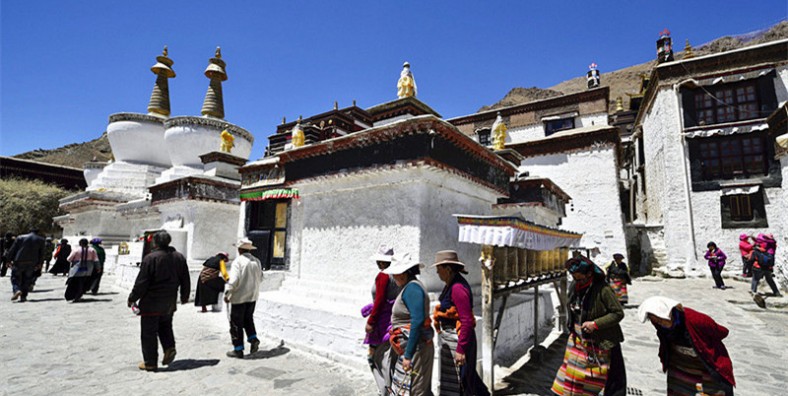 About Tashilhunpo Monastery
Founded by the First Dalai Lama in 1447, Tashilhunpo Monastery is one of the six big monasteries in Tibet. It is the seat of the Panchen Lama, the second ranking person in the Gelugpa Tibetan Buddhist hierarchy, after the Dalai Lama. The monastery houses the tombs of Panchen Lamas and a 22.4-meter statue of Maitreya Buddha. Tashilhunpo remains popular among the Tibetans, as they carry on coming here on pilgrimage.

Standing on the entrance of Tashilhunpo, you can see the grand buildings with golden roofs and white walls. The remarkable Tangka wall which is nine-floor high, displays the images of Buddha on the 14th, 15th and 16th of May every year following the Tibetan Lunar Calendar.

Besides the grand palace and gigantic statues, the Tashilhunpo also treasures characteristic wall paintings. Because of the variety of shapes, resplendent colors and exquisite painting, the murals are considered to be another masterpiece of Buddhist art. Rare sutras, tangka, china and glass service of the Ming and Qing Dynasties are also invaluable asserts found in the monastery. These are good relics for researching the history and society of Tibet.

What to See
Tashilhunpo Monastery covers an area of 150000 square meters, and there is wall around the palace, circumference of more than 3000 meters. Temple there were 57 scripture halls, 3600 rooms, the entire temple built depending on the hillside, lean on the mountain on the back, and the temple is facing sun. Goldentop and red wall of the main buildings are more majestic and magnificent. Seeing in the distance, people will find that the palace is marked and glittering, macro and grandeur. Look inside the temple, incense burner is raising smoke, each Buddha looks different, but their forms are very realistic. More than five hundred years, Tashilhunpo Monastery has been attracting Buddhist believers both at home and abroad come here to worship.

Main Assembly Hall(大经堂)
Main assembly hall namely The Tsochin Hall and it is the first building of Tashilhunpo Monastery, which taken 12 years to construct. In front of the main assembly hall, there is a more than 600 square meters of sermon site, this place is the panchen sermonized monks of the whole monastery and the place for monks to debate Buddha scriptures. Four walls of sermon site has stone carved Buddhist patriarch, four heavenly kings, the eighteen arahants and forms of one thousand Buddhas and eighty Buddhist monks, various flying fairy and bodhisattva into the cave of walls. In the main assembly hall, 48 pillars of red paint stands in a large distance, and in the middle of the bearing hall there is panchen throne. On the left of hall, is the extended big chapel with the help of king of Ali Guger in 1461 AD, and he moulded a statue of 11 meters high’s Maitreya Buddha figure which completed by Nepalese craftsmen together with the Tibetan craftsmen.On the right side, is Tara chapel, inside is 2 meters high white Tara statue with green Tara clay sculpture aside.

Jamba Chyenmu–The Maitreya Temple(强巴佛殿)
On the west side of Tashilhunpo Monastery is the tallest building that is Jamba Chyenmu Buddha Hall which means the Maitreya Temple and is called Jamba Chyenmu in Tibetan. It was erected in 1914 by the Ninth Panchen Lama to house a gigantic statue of the Maitreya Buddha and is 26.2 meters in height. The hall is a five floors hall with two floors winding corridor below, and the hall is 30 meters high, covers an area of 862 square meters. The statue sits on a 3.8 meters splendid lotus throne in the “European” posture with its hands in the symbolic teaching pose. A single finger of the giant figure is almost 4 feet in length. The statue contains 279 kg (614 lbs) of gold and 150,000 kg (330,000 lb) of copper and brass moulded on a solid wooden frame by Tibetan and Nepalese craftsmen. Small versions of the Maitreya are positioned in all four corners of the chamber and the murals on either side of the door show a more active, antic style than any to be seen in Lhasa. Jamba Chyenmu is Maitreya of Han Buddhism, and in Tibetan Buddhism, Jamba Chyenmu is in charge of future therefore it is taken seriously by believers.

Gudong: The Panchen Lama’s Palace(曲康夏)
Qukangxia is the old living quarters of the Fourth Panchen Lama, the Panchen Lama’s Palace known as Gudong. Inside, a narrow courtyard gives access to the temple containing the Fourth Panchen Lama’s tomb. The temple vestibule has very large inscriptions at either end praising his holiness. Inside, the silver and gold stupa tomb rivals any in the Potala Palace in Lhasa for the splendor of its craftsmanship and jewels. His stupa is gorgeous owing to his major contribution of Tashilhunpo Monastery. The stupa measures11 meters (36 ft) in height it contains 85 kg (187 lb) of gold and countless semi-precious stones. Fourth Panchen Lama lived 94 years old, and in order to memorize him, Buddhist monks built this stupa which took 4 years and 130 days to finish in AD 1666. On the left is three statues representing Amitabha, the Buddha of Infinite Light, whom the Panchen Lams are thought to embody. An upper level has a number of long chapels embroidered in silk thangka’s that relate the lives and events surrounded the Panchen Lamas. The old living quarters of the Panchen Lama are no longer open to the public, but the rooms are more modest and humane than any of the rooms at the Potala.

Stupa Hall(灵塔殿)
Stupa Hall of Tashilhunpo Monastery is successive Panchen stupas. There are a total of eight Panchen stupas in the Tashilhunpo Monastery. During the “Great Cultural Revolution”, the Fifth to Ninth Panchen Lama stupas were destroyed. From 1985 to 1989, Tenth Panchen reconstructed a multi-burial stupa hall for Fifth to Ninth Panchen, named “Tashinamje” (auspicious kingdom of heaven).

Sutra Hall(佛经堂)
The Sutra Hall is the repository chamber of the monastery, containing some 10,000 hand-carved wooden blocks used for printing the Buddhist scriptures. These are all Tibetan translations of original Sanskrit texts. Visitors to the temple can buy colored prayer flags and Tibetan lunar calendars as souvenirs which are printed in the chamber.

Tara Hall(度母殿)
The Tara Hall is in the east side of the Main Chanting Hall which contains the throne of the Panchen Lama and two connected chapels. The middle chapel is devoted to an elaborately ensconced Sakyamuni with eight Bodhisattvas robed in silk brocade. The west side is Maitreya Hall. Tara Hall means Drolma Lhakhang, and is dedicated to Tara, the goddess who sanctifies the mountain above and whose image is depicted throughout the temple. A White Tara goddess occupies the centre of the altar with a Jade Green Tara on either side.

Development History
In 1447 Tsongkhapa youngest disciple, (has been retrospected for the first Dalai Lama dge-vdun-vgrub-pa), built Tashilhunpo monastery with the support of two Tsang nobles. At the first the temple named as “Gang Jian Dian Pei”, meaning snow area makes temple prosperous, late it was changed the name of Tashilhunpo Monastery by dge-vdun-vgrub-pa, and it took 12 years to build. In 1600, the Fourth Panchen Lama has carried on abbot and conducted the massive expansion to monastery. The fourth panchen lama is the first to be conferring the panchen lama, after that Tashilhunpo Monastery became the living quarter for successive panchen lama.

Usually, Tashilhunpo Monastery is covered in every itinerary which goes to or pass by Shigatse, which means you don’t have to have trouble with transfer to the site.

● After entering the temple, you must walk clockwise from left to right.

● Taking pictures is restricted in most halls. You may ask for permission from the lamas and sometime you need to pay for it.

● Apart from the main palaces, there are lots of rooms with complicated layout and easily to get lose. Please keep up with your tour guide when visit in the grand monastery.

● Tashilhunpo Monastery Kora: make a short kora around the monastery is an interesting walk to find pilgrims, prayer flags, prayer wheels and some offerings along the way. By climbing on a hill-side, you can have a great view of the monastery and Shigatse.