Nagqu Festivals and Activities include a brief introduction of festivals and activities for Nagqu Festival Tour and tell travelers what to do in Nagqu, such as including Tibetan New Year and more events. Nagqu, belonging to Tibet, is the political, economic, cultural, transportation, information and communication center of northern Tibet. It has an altitude of 4,450 meters, the maximum distance of 233 km east-west, north-south maximum distance of 185 km, with a total area of 16,195 square kilometers. In 2000, the county had a national product of 131 million yuan. It is a wealth place full of simple folk custom.

On Tibetan New Year's Day, people bring their offerings and highland barley wine to their own crops to sacrifice the Harvest Goddess. Everyone in the ground sets up a long pole, hanging streamer on the top of the pole, and wheat straw bound on the lower. People build an altar in front of the pole, and then simmering mulberry, singing, dancing, begging the Harvest Goddess a booming harvest. There are lots of New Year entertainment. From the beginning of the second day, the men take part in horse racing and archery, the arrow is a wooden cone drilled a lot of holes, when arrows are taken away from the string, people begin dancing and drinking around the campfire. In recent years, the Nyingchi Trade Fair has been added to the traditional celebrating activities in which one can buy a wide range of handicrafts.

When the star of Saga appears in the sky in the fourth month of Tibetan Calendar, Tibetan Buddhists start to celebrate the most auspicious and significant time of a year-Saga Dawa Festival. This month-long festival honors Buddha Sakyamuni whose birth, enlightenment, and nirvana all took place in the same month and reaches its peak on 15 April of Tibetan calendar.

Other Festivals in Nagqu

Like many nomadic peoples in the world, Tibetans and horses are very closed. Nagqu Horse Festival, which is named "Daqiong(达穷)" in Tibetan language, is a large-scale traditional festival in northern Tibet. Every year on August 1st, the Nagqu Horse Racing Festival kicks off in Tibet and lasts five to fifteen days.

Horse racing festival is also a love season. Han people used to regard it as "romantic." Therefore, it is no exaggeration to say that the pastoralists have valued the horse racing festival beyond the Tibetan New Year. Before the horse racing festival, herdsmen come from a few hundred kilometers around the township with tents, dressed in colorful national costumes, wearing their most admirable jewelry. The tents were crowded with the Nagqu Racecourse overnight, thus it was a spectacular "city" then. Nagqu is famous for its activities, such as the exchange of materials, art performances, various folk sports such as tug of war, long jump, holding stones and so on.

More about Activities in Nagqu

Nightlife and Entertainment in Nagqu 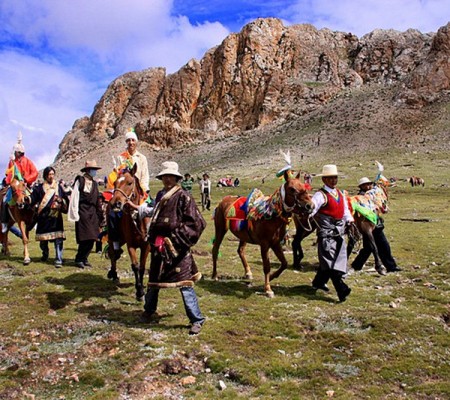 About Nagchu Horse-Racing Festival There are many Horse Racing Festivals in Tibet, but the most magnificent festival is in Nagqu, which is the most beautiful scenery on the northern...