Each May 15 of Tibetan calendar, the whole villagers will put on the festive costumes to simmer mulberry on the Dumu Mountain, praying Gods of mountains for good harvest. The Eagle Festival on the mountain has much more religious factor.

Nyingchi is located in the mountainous area, there are a lot of mountain customs, such as archery. No matter what traditional festival is, there are archery games. At this point, the archer is in the archery game, others singing and dancing for cheering.

This festival comes in April of the Tibetan calendar. On the 15th of April, the date is believed to be the birthday, the date of accomplishing excellent practice and nirvana for Sakyamuni, the Buddhist followers flock to the Basong Lake from everywhere and circle around the lake clockwise.

Among 850 sorts of azaleas in the world, 460 are found in China and 170 kinds in Tibet. After June each year the Sejila Mountain in Nyingchi becomes an azalea ocean. At that moment the annual azalea tourist festival supplies plenty of tourist information like the classical tour route, tourist products. The fair also constitutes a platform for business negotiation, investment and other cultural activities.

When spring approaches, most parts of Tibet are still covered with snow, Nyingchi has already been immersed in a sea of peach flowers. In order to celebrate this grandeur of nature and advocate Tibetan culture, Nyingchi Peach Blossom Festival has been holden by local Tibetans and enthusiastic tourists since 2002. During this grand festival, you can not only enjoy the rosy peach blossoms and exotic pastoral scenery but also explore Tibetan villages, watch horsemanship performance, try some local delicacies, etc.

Nightlife and Entertainment in Nyingchi 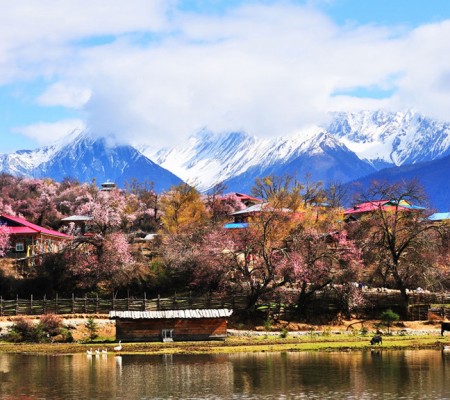 When spring approaches, most parts of Tibet are still covered with snow, Nyingchi has already been immerged in a sea of peach flowers. In order to celebrate this grandeur...