Nyingchi Overview introduces basic information, location, attraction, best time to visit, culture and transportation, etc, for people who want to travel in Nyingchi. Located in the southeast of Tibet, Nyingchi means the throne of sun in Tibetan language. Bordering Burma to the south, Nyingchi is also famed as the "East Switzerland" and "Jiangnan of Tibet"(Jiangnan in Chinese means the fertile and prosperous area in the south of the Yangtze). The deepest canyon in the world, Yarlung Tsangpo Grand Canyon, lies here.

Nyingchi has an average altitude of about 3,000 meters, while the lowest point is only 900 meters, which is lower than other places in Tibet. It is the region with the largest gap in the world's vertical landforms. The Himalayas and the Nyainqentanglha are like two dragons stretching from west to east. The Mount Namjagbarwa is the white snow peak on the dragon's ridge. It is 7782 meters above sea level and is the highest peak of the southern Himalayas. It is connected to the Hengduan Mountains and forms a unique terrain surrounded by mountains.

Nyingchi is situated at the north bank of Yarlung Zangbo River, lower reaches of Niyang River, at the southeast part of Tibet. The terrain here is dangerously steep with river valleys. The average altitude is 3,000 m with relative height difference of 2,200 – 4,700m. Nyingchi is a city with lowest altitude in Tibet. Niyang River slowly flows through the city surrounded by mountains. The rainfall here is abundant and climate is comfortable. The mountains here are extending from east to west, higher altitude in north and lower in south, which has great height difference. The climate here is complicate with great vertical changes, forming coexistent variety of climatic zone: tropical climate, subtropical climate, temperate climate, boreal climate, humid climate and semi-humid climate. The annual precipitation of Nyingchi is around 650 mm, annual temperature is 8.7℃, with annual sunlight 2,000 hours and 180 frost-free days. It boasts fertile lands and rich resources. The average temperature of winter in Nyingchi is above 0℃, while summer’s average temperature is 16℃. The four seasons here are distinctive, and the summer is not so hot and winter is not so cold. But every May to September, is the rainy season. Lots of rainfall is easy to cause landslide, debris flow, collapse and other natural disasters.

The period between March to October is the best time to visit Nyingchi. From March to April, plum blossom all over the mountains and plains makes Nyingchi a fairyland. From May to June, tourist can appreciate the beautiful rhododendra. Nyingchi turns to be green world from July to August and golden yellow during September to October, which you can participate in the major festival-Shoton Festival. The period between May to September is the rainy season of Nyingchi. At this time, debris flow and collapse are common to see so tourists should pay attention to weather forecast.

As of March 2015, Nyingchi has jurisdiction over 6 counties of the former Nyingchi area and new-built Baiyi District. The People's Government of Nyingchi is located at No. 18 Guangfu Avenue, Baiyi District.

Nyingchi is a place, where is full of mysteries, such as the mysterious ethnic groups. In ancient time, Nyingchi City is dated back to 5000 years ago with discovered human remains and graves belonging to the Neolithic age. According to the related researches, human beings had a slash and burn agriculture as well as the fishery by the river at that time. Concerning to the recorded history of Nyingchi, it is in the inscriptions on precipices located nearby the Yongzhongzeng Village. Though caved 1200 years ago, these scripts are still distinct describing the legend about the first head of the Yanaon Tribe, who had moved from Bome and commenced his leading career of the Yanaon tribe on the holy mountain of Kongpo. From the 13th century, Nyingchi was in the sphere of influence of the Karma Kargyu, Tibetan Buddhism. It was the habitation of Monpa people and Lhoba People, which reserve rich traditions of their characteristic habits and customs.

As one of the important destinations in the classical Tibet Travel, Nyingchi is home to more than ten ethnic groups such as Tibetan, Han, Hui, Nu, Monpa, Lhoba, Dulong Naxi, Tujia, Lisu, and the Deng people who have not yet determined the ethnic composition. The total population is 231,000, of which the Tibetan population accounts for  more than 90% of the total population. Except for Medog County, the residents of the other 6 counties are mainly Tibetans. Nyingchi Culture is very colorful. When you come to the mysterious Nyingchi, it is easy to find Tibetan architecture everywhere and listen to the Tibetan language said by Tibetan people and feel the Tibet culture.

Located in the southeast of Tibet, Nyingchi borders with Lhasa to east, Shannan to southwest, Qamdo to south and Nagqu to north. Due to the development in recent years, Taking flight and long-distance bus are the two major ways to get to Nyingchi. After arriving at Lhasa by air or train, tourists should take long-distance bus in Lhasa East Bus Station to Bayi District, Nyingchi County, which is 406 kilometers away from Lhasa. The driving time is 8 hours and the price is 120 yuan. There are buses running to Mainling County, Nang County, Bome County and Zayu County in Nyingchi area and also Lhasa, Qamdo and Lhoka in Tibetan area.

Things to Do in Nyingchi

Nyingchi, a place with long history, is always a heaven for many people all over the world. Nyingchi is also a perfect destination for people who want to seek for antiquity, explore the fascinating natural sceneries. When you come to Nyingchi, the top attractions in Nyingchi are must-visit.

The forest coverage rate of Nyingchi City is 46.09%. As the third largest forest area in China, 80% of Tibet's forests are concentrated here. Nyingchi has found and confirmed more than 3,500 kinds. Nyingchi has more than 120 kinds of edible fungi, and the annual output of pine mushrooms is more than 300 tons. 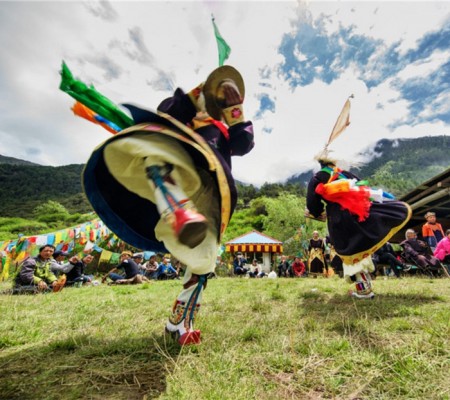 Located in the southeast of Tibet, Nyingchi means the throne of sun in Tibetan language. Bordering Burma to the south, Nyingchi is also famed as the “East Switzerland” and “Jiangnan...